A hard conversation to have...

When I went into hospital it wasn't all straight forward; broken waters but no labour. After a few days they decided to induce me. After being induced at midnight I was hoping to wake up in the throws of labour but no such luck. Instead I was taken to the labour ward and in effect my labour was started for me.

I might pluck up the courage to post my birth story - I wrote it a year ago but haven't got round to it just yet.

So when I was in the final stages of having Caleb the midwife told me that there would suddenly be people in the room, a team for me and a team for baby. Precautionary measures as my waters had broken days ago and therefore we were both at risk of infection.

Once Caleb entered the world; doctors and nurses rushed to check him. He was beautiful and perfectly formed. He breathed for himself straight away and his big, wide eyes just watched all the madness in the room. He was fine but needed to be canulated and given antibiotics straight away to stop any infection. My brand new baby had needles in him before he was even 10 minutes old.

They took him away to give him the antibiotics along with my husband and I waited for him to come back but I myself was wheeled off to theatre.

Once we had him back, we enjoyed some hours just staring and trying to take in our baby, with regular check ups to see how Caleb and I were doing. About 3am we were taken down to the transitional care unit. Thankfully he was well enough not to need to go to neonatal. We breathed a sigh of relief.

Obs were taken every few hours, he had hypothermia so he was bundled in layers upon layers (7 to be exact). He had bloods taken repeatedly by various doctors. Apparently he was hard to bleed. Something which was hard to watch, but I somehow felt I must. If I couldn't stop this for my baby I was sure as hell going to take on his pain. Watching failed blood draw after failed blood draw was horrible.

Results came back repeatedly telling us he was jaundice and we were aiming for his bilirubin levels to drop. He also had low platelets which meant his blood was at risk of not clotting. He had suspected sepsis which they were treating too.

In order to treat Caleb's jaundice he was placed under a UV lamp and had to be under there for hours, sometimes 24 hours at a time. He had on only an eye mask and a nappy. I so desperately wanted to hold my baby. Sometimes I would sneak him out just to cradle him in close or have some skin to skin. Most of the nurses were ok with it but others told me he needed to go back under the lamp. I felt like I couldn't get him out and it killed me.

Bloods were taken at strange hours and we'd get woken up at midnight or 4 in the morning to take more blood. My baby was like a pin cushion.

We had numerous visits from doctors, even the consultant came to see us each day. They asked us so many questions and did so many tests. I felt so intimidated by them because I felt out of my depth. There was a notes section that they wrote down when mum had 'no concerns'. Should I have had something to be concerned about? Was I a terrible mother?

Tom handled them all really well, he works in the medical profession so got it. I sat back as he took the lead and asked questions I never even thought to ask.

One evening a doctor came to take blood. As I was sleeping, Tom went with him. In Tom's sleep deprived state he said he had the most confusing conversation with the doctor. Something about further testing. The same doctor came back to take blood in the early hours and spoke to us in hushed whispers again, telling us the consultant was coming to see us and we should really know for any future babies. Know what?

Tom and I had exchanged glances that immediately unsettled both of us. What was he on about? What was wrong with our baby?

It's only since this happened that I now know my husband had starting putting the pieces of the jigsaw together but he didn't tell me anything. He was protecting me.

You know it's funny, I didn't know what was happening but in my gut I knew it was something. Something was going on with my baby and I was powerless. We waited with such anticipation for the consultant to come the following day. I thought he would come later in the day making us wait but he didn't, he came first thing.

When he came in, with the nurse, he suggested we go somewhere more private. They were the words I was dreading hearing but I knew they were coming.

We headed down the corridor, the nurse wheeling Caleb in his cot bed. Even as I write this my heart is full of anxiety. That walk was the longest and hardest. I felt so far away from my baby. I wanted to pick him up and run.

We sat down in a large unused bay around a large table. I remember it so well. The curtains were all drawn around the empty beds and it was eerie.

I couldn't concentrate on the words coming out of the consultants mouth although he kept saying 'I think your baby is fine'. He spoke for ages and all I could think was just tell us! What he was telling us was other doctors didn't think our baby was fine. In actual fact, they all thought he had Down's  Syndrome.

My heart stopped. Time stopped. I had no reaction immediately. I wasn't expecting that in a million years. I'd had the Down's testing done and my results came back fine. Tom's reaction was my undoing, he knew that was what was coming, he'd worked it out. He listed symptom after symptom that he was sure Caleb didn't have, all with tears running down his face, struggling to catch his breath. I sat there motionless. The consultant was quick to agree with Tom but had to tell us as a duty of candour to his patients and needed our permission to have genetic testing done. Suddenly the jigsaw pieces slotted into place for me too. They'd asked who we thought he looked like, visit after visit from big groups of doctors that didn't visit the others on our ward. Constant questions and glances at one another.

My heart was literally aching.

The nurse that was there was so lovely, she immediately sought us a private room and explained things to us once more. She said you will look for it and you will see it but it doesn't mean it's there. Words I repeated to myself a thousand times after.

The test took two weeks to get back but our consultant got them rushed through. The few days we waited were agonising. Tom and I couldn't speak. We just held each other and took it in turns to be utterly distraught. This wasn't what we had ever imagined. Our whole world had just come crashing down. The elation we should be feeling of having a newborn wasn't there.

It's strange the waiting, you imagine every scenario going. I grieved in that time. I mourned something that might not be. I'm not religious but I prayed. I begged. I hoped.

I couldn't speak to my family it was too hard. I could barely look at them. I only wanted Tom's company. He was the only person that truly got it at that time. Caleb was our baby, this was happening to him and us.

When Tom had popped home for a shower one day one of the midwives put her head round the door. She had just heard. I was sat on the bed looking at Caleb (looking so hard to either prove or disprove the theory). She asked me how I was and typically I said fine. She came and sat down next to me on the bed and said, 'but you aren't' and put her arms around me. In that moment I needed that. I sat and cried my heart out. That moment will stay with me forever and even know I have tears streaming down my face because people are so kind and I felt so moved she would do that for me. I needed that.

I was taken back by how supportive the staff were, that sounds strange to say, but they seemed genuinely sad for us and kept telling us how they disagreed with the doctors. They had all the hope too.

After waiting, in what seemed like forever, we were finally given the news that Caleb didn't have trisomy 21. His genetics were 'normal'.

I don't mean to have dragged this all out, it's how we felt. It lasted a lifetime. But we got the news we had begged for. Our baby wasn't going to have to have heart surgery, an uncertain future. If he had we would have loved him all the same and completely embraced Down's syndrome. We can not stress how incredibly fortunate we feel and we know this story could have been so very different. That's not to say parents who have children with Down's are unfortunate but it would have changed everything.

We know that there are parents going through so much worse. For us this was our battle and we were lucky enough to hear the news we hoped for. I'm sharing this because I need to let go of it. I've carried this for so long. We've told next to no one because we didn't want people to 'see it' even though it's not there.

It's a conversation I can't easily have because it's affected me more than I realise perhaps not the what could have been but more the initial days of not getting to experience the happiness I should have done. Every time Tom and I discuss it we are extremely emotional. So I apologise if this is the first you know about it, and are friends of ours.

You might also be thinking but he doesn't have it so why is it such a big deal. But going through that was so desperately hard and not something you just forget.

Caleb Gray, we love you. 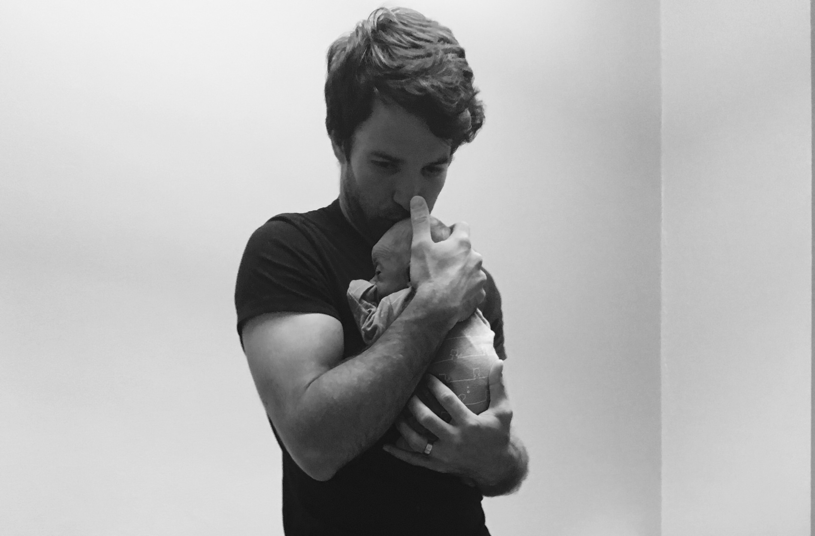 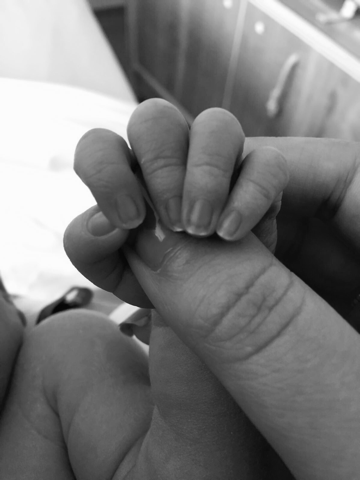 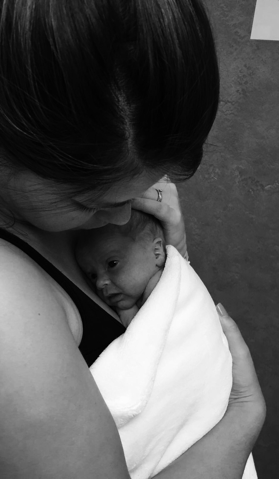 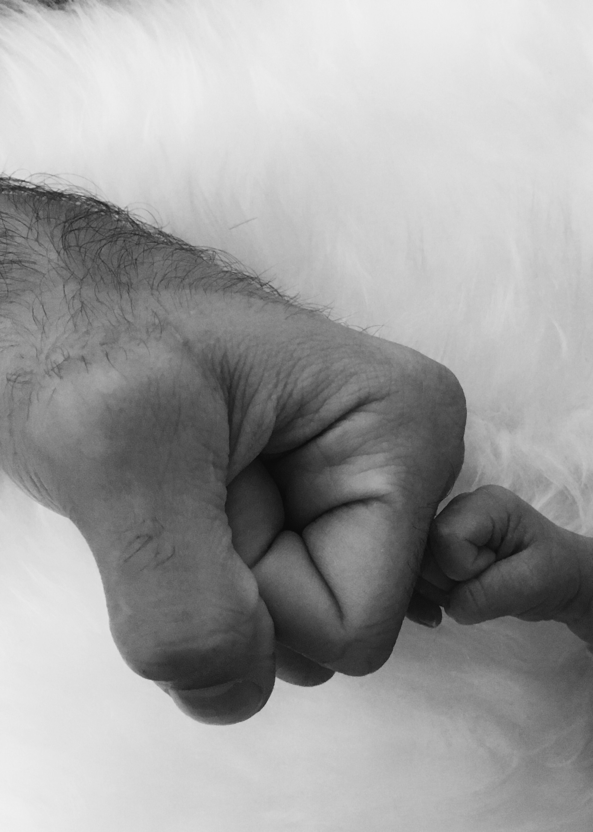